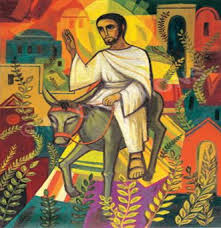 A Joyful (if surprising) Entrance

I look forward to being with you virtually or physically as we celebrate, remember, and continue to believe.

With gratitude for who you are in the world,

Charis
An Ecumenical Catholic Community
http://www.newcatholiccommunity.com
cháris Χάρις khar’eceOur name means grace, good will, loving-kindness, favor; of the merciful kindness by which God, exerting his holy influence upon souls, turns them to Christ, keeps, strengthens, increases them in Christian faith, knowledge, affection, and kindles them to the exercise of the Christian virtues.

One Reply to “Palm Sunday: A Joyful Entry (Into Holy Week)”